I currently live in southeastern Michigan, a Midwestern state considered part of the Great Lakes system. (In the satellite picture below, the Lower Peninsula of Michigan is the part that looks like a green mitten surrounded by blue water. The Upper Peninsula is the part north of that, with more water north of it.) 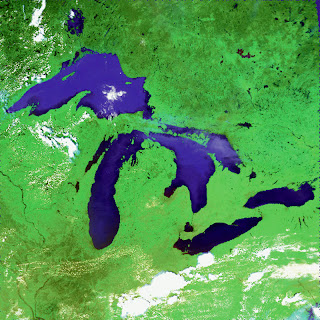 NOAA satellite image of the Great Lakes
Michigan has shoreline on four of the five Great Lakes -- Lake Huron to the northeast, Lake Michigan to the west, Lake Erie to the southeast, and Lake Superior above the Upper Peninsula -- and southeastern Michigan is within driving distance of Lake Ontario (just above the east end of Lake Erie).

While Lake Erie is probably the closest to where we live, and all the Great Lakes I've encountered are magical, Lake Michigan has a special place in my heart. 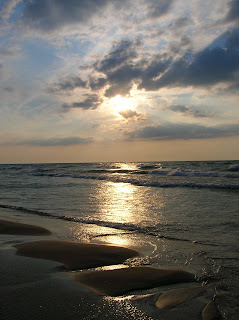 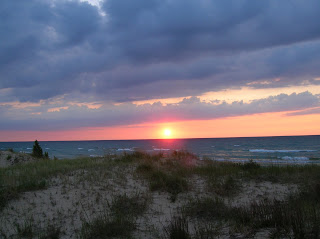 Lake Michigan and British Petroleum have been in the local news quite a bit lately. BP recently secured a permit from the state of Indiana allowing it to dump more ammonia and suspended solids into Lake Michigan.

There's a fair amount of tension between different Great Lakes states, as well as between those states and Canada, regarding who makes decisions about pollution and cleanup in the Great Lakes. There's also a lot of grassroots, and even some government, work to clean up the Great Lakes and honor them for the national and international treasure that they are.

The good news is this: BP has announced that it will not take advantage of the permit, but has pledged to operate under the restrictions of its previous permit. There is at least one lawsuit pending to make that pledge legally binding, but at the moment, a lot of us are cautiously optimistic.

And if nothing else, the outcry did prompt BP to publicly back down.