There's an expression my colleague Julie Middleton came up with in consultation with me as a workshop title, and which she has freely allowed me to use: Singing the Goddess.

This comes to mind about a crochet pattern I've been working out.

A few nights ago night, I think I successfully completed designing a crochet pattern for a project that's been in my head for quite a while. It's a triple moon (triple Goddess) in white on the midnight-blue background of a triangular shawl.

I've crocheted a number of triangular shawls over this last year. The first one I ever made was for the wedding of two F/friends in 2005 (of white Egyptian cotton yarn). 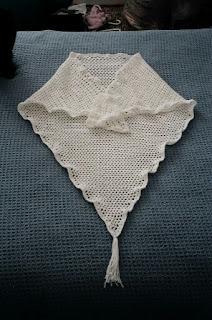 And then I made a shawl for myself, to help me settle into, and stay warm during, Meeting -- candy apple red, acrylic and polyester, and another one that was in my head for a long time first.

But this last year, I started making rainbow prayer/comfort/Meeting shawls for the silent auction at FLGBTQC Gatherings. So far, I've made three, and I'm most of the way through a fourth. Two are in good homes, one's waiting for me to make arrangements with the woman who bought it, and the fourth one is also already spoken for. It's very gratifying. For my shawl and for the rainbow shawls, I've been using Lion Brand Homespun, an acrylic and polyester yarn that's sometimes a pain to work with, but that's soft and cozy, machine washes well, works up quickly, and that I'm not allergic to. (I don't think I've worked in any wool in the last year, since my asthma was so bad last fall.)

Just like the Candy Apple caught my imagination -- it reminded me of an old blanket we'd had once, where the color just made me want to wrap myself up in it; and when I saw the yarn, I knew I wanted to wrap myself up in something I made of it -- one of the blues I've used for the rainbow shawls has also inspired me. I couldn't find the bright blue I'd been using, so I ended up with Colonial instead, and it caught my imagination.

So I think this is the color I'll use for this shawl, with white for the moons (intarsia, or crocheting them in, rather than embroidering them on after).

The design works in theory. But as my acquaintance Nancy says, "I want to move to theory. Everything works in theory." So, we shall see what happens when I actually try to work it. This'll be a neat learning experience.

Posted by Morgan at 2:42 AM No comments:

In 2000, the choir I was singing with recorded "what i want," a song based on part of a poem by Pat Lowther, with music by Stephen Smith.

This was hard for me, but a good experience. I am a survivor of domestic violence, both as a child and an adult, and Pat was murdered in 1975 by her violent and abusive husband. We'd sung the piece several times in concert, but recording produces its own additional tension. At the end of the final take of the song, I burst into tears -- relief? pain? My friend Laurie put her arms around me, and other friends, including Jen, a Coven-mate, and Mo, whom I was dating at the time, and other women in my choir also comforted me. I was okay; I had just needed to cry. I had good support and good community from women who understood, who got it.

I've had parts of the song stuck in my head today, because I'm participating in a research project at the University of Michigan on trauma and recovery, and I filled out detailed questionnaires this morning about scary things I've experienced. I feel good about the research project: the project's head researcher is very good, the project is well-designed, and it's really important to get good research on trauma recovery. But participating in the project itself is not fun.

I didn't space out about the difficult, scary, or life-threatening things I've chosen to do as an adult. Funny how choice and being an adult help. And so does support. I chose to go to a war zone to do humanitarian work (even if I didn't choose to be left there by my first team; thank the Goddess for the other folks I knew in the region); I chose to be on the Gulf Coast after a major hurricane, even if I didn't know I was going to go through another one while I was down there; I even chose to respond to the shooting in front of my house, although I sure didn't choose the shooting. I was an adult, and I took good care of myself, during all of those; and I also had good support from other people. Those experiences have had after-effects, but not like the violence I lived through as a kid and a teenager.

...to breathe
continuously the sources of sky,
a veined sail moving,
my love never setting
foot to the dark
anvil of earth

The earth has always been a source of comfort for me. It's sad for me that it doesn't seem to have been for Lowther. But that yearning for expansion of soul is something that resonates with me; it's something I've definitely experienced. I was writing about that last night: the ways in which that expansion of soul -- the opposite of constriction -- has marked both the recovery work I've done, and opportunities for more growth in front of me.

There's more... but that's a different piece of writing.
Posted by Morgan at 12:40 AM No comments: