Pax over at Chrysalis has called for Pagan bloggers to write about our values during the month of June:

I have decided that I am tired at how some factions within other spiritual and faith traditions talk and act as if they have a monopoly on values and virtue and ethics.

I am reminded of how the public debate over same-gender marriage has been polarized into the notions that "Religious people oppose gay marriage" and "People who support gay marriage are godless atheists with no morals."

First off, it's same-gender marriage, thank you very much, and the real issue is marriage equality. IMHO. Secondly, there are plenty of "religious" folks -- both individuals, and organizations -- who support marriage equality.

It's time for religious/spiritual individuals and organizations to stop allowing ourselves to be made invisible on the issue of marriage equality - to stand up and reclaim our space, our stance, our values, our beliefs.

I am also reminded of the notion that people who aren't religious can't possibly live ethical lives, with atheists as those of us in the most danger and with the least guidance. The notion that reason and inner conviction aren't good enough to lead us to live "good" lives. Oh, please.

Many of the same arguments are held up as why Pagans can't live ethical lives. That without Yhwh, Jesus, or Allah, we're doomed -- our Gods aren't good enough. Again, oh, please.

So it's also time for Atheists and Pagans (and those who are both) to stop allowing ourselves to be demonized and made invisible on the issue of ethics and values - to stand up and reclaim our space, our stance, our values, our beliefs.

Christians, in general, are united by a theology that is supposed to inform their values. Among Pagans, there's a lot more diversity of thealogy, and I suspect just as much, if not more, diversity of beliefs among Atheists. I'm really looking forward to reading more about other Pagans' as well as Atheists' values.

In the meantime, I'm very much enjoying the Seattle Atheists' Bus Ad Campaign on Metro Buses. Because they ask people to think. 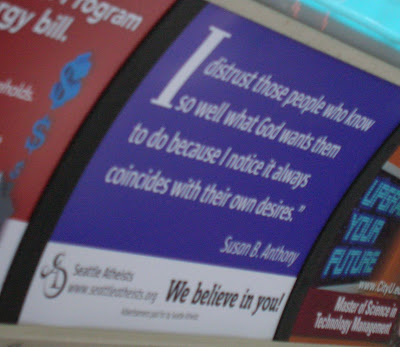 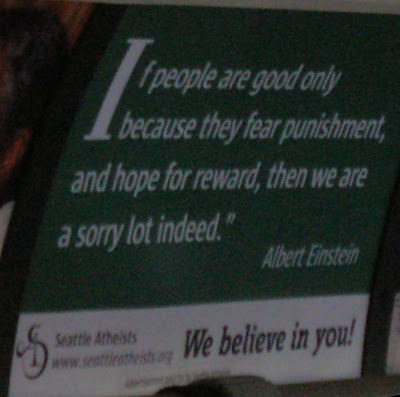 I think I know what you're trying to say by stressing it's "same-gender marriage" instead of "same-sex marriage" but really, legally, what's not allowed is same-sex marriage. I think most states would allow a transwoman and a ciswoman to get married if the transwoman's birth certificate had not been changed (since that's such a expensive and onerous task, and not even permissible in some states), and on the same grounds would not allow a transman and a ciswoman to get married if the transman had not had his birth certificate changed.

See you next month!

Oooh! Does this mean you are coming to Summer Gathering?

I've been thinking about how to articulate what I mean... Part of it is that gender and sex aren't the same thing: biology, presentation, legality... They're all very messy, and not nice and clear-cut the way society and the law would like them to be.

I have a transwoman friend who's a lawyer, who wrote an interesting paper in law school, which she's shared with friends, analyzing whether, and in what states, she'd be considered legally married to her ex-wife and/or legally able to marry her ciswoman partner. It's AMAZING how completely f'd up the patchwork of laws in different jurisdictions really is.

But I agree with you about the marriage equality issue. At Mid-Winter, someone stood up and said that marriage equality is not a transgender issue. Which rather blew my mind, for the reasons you state, and for the reasons my friend Denise states, and for plenty more that I can think of just off the top of my head. I think most of my transgender friends disagree with the Friend who said that, but it's not like I've taken a poll.

I hope to get to spend some time talking with you soon!