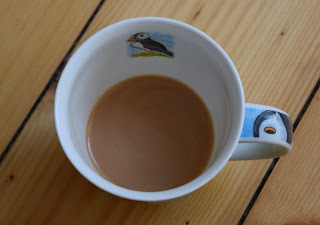 I was putting a tea bag into the compost bin on the kitchen counter this afternoon when I was suddenly struck by how much things have changed in 30 years.

In 1985 I was still living with my family of origin in a large East Coast city in the Mid-Atlantic US.  We didn't recycle.  We didn't compost.  The City picked up our trash once a week.  If we raked our leaves into the gutters in front of our house by the fall deadline, the City would pick up our leaves, too -- there was a large truck with huge, flexible tubes like vacuum cleaners.  I have no idea, now, what happened to those leaves -- were they landfilled?  I suspect so.  Perhaps they were shredded and used for mulch for City parks.

I don't remember what happened to Christmas trees when we were done with them.  Unlike most of our neighbors, who were Orthodox Jews, we did have one every year.  Did we cut them up and put them with the trash?  Was there a special tree collection by the City?  (Would they even come down our block for that -- ?)  Some years, I know, my parents used Christmas tree limbs for mulch.

I remember being frustrated because I knew that recycling existed, but only elsewhere.  I don't think I'd ever heard of composting, except as something hard-core organic gardeners did (we had grown vegetables for many years, but never composted). I didn't know anything about composting as a way to keep things out of landfills or save the planet.

A few years later when I went away to college, I discovered a world where ordinary people recycled.  I was so excited!  It was mostly paper and cardboard.  There were plain old cardboard boxes in the dorms and the brand-spanking new computer center, signs blu-tacked above them on the walls, for white paper, colored paper, and cardboard.  The following year, we had fancier cardboard boxes, pre-printed even; taller, with slotted openings. No longer makeshift; Very Official.

When I went back to my family's house during breaks, I saw with fresh eyes, disturbed and disappointed.  There was now a recycling center within an easy drive of my family's house, and my family was receptive, so we started collecting our easy recyclables -- at the time, probably only paper and cardboard, and plastic milk jugs -- and making a drive to the recycling center drop-off something like once a month.

I'd had my first paper route when I was 9, and our city still had a newspaper with home delivery well into my teens, which my family still got.  We kept our recycling in our garage, and went to the recycling center when it got too full of recycling for the cars.  I don't remember where the plastic was kept -- right front corner? -- but the newspapers got stacked up against the left-hand wall.  The garage itself was made of two-by-fours, plywood, and shingles; we'd rebuilt it ourselves some time in my late school-age years, and repaired again when I was in high school.  When I was 19 and living with my family again, our garage was firebombed in an anti-Semitic hate crime (along with others in the neighborhood), and it caught and burned very quickly with all that newspaper and dry timber.  We had two beat-up old cars at the time, and thankfully, neither was in the garage that weekday afternoon.

Not long after that, we got curbside collection of paper and cardboard, but still had to haul plastics like milk jugs and yogurt containers.

I still remember how novel, exciting, and ground-breaking it was to have someplace we could take our recycling to, and then to have collection for just cardboard and paper.

In the early 90s I moved back to my college city, and what the recycling was like depended on which township or part of the City you were in.  But it was still better than where I'd lived before, and I was more passionate than ever about recycling.

It wasn't until the late 90s that I thought seriously about composting.  My best friend and co-Priestess, who lived in an apartment with a balcony, had been doing kitchen composting for a while, and had a worm bin on her balcony; she used her compost on her house plants and balcony garden, and gave it away to friends.  After my ex and I split up, I started gardening, and started a garden compost bin.  It wasn't very successful -- really, I didn't know what I was doing -- but it was a start.

When Beloved Wife and I moved in together, we rented a house with a garden.  With my encouragement, she, an experienced gardener *and* composter, built a wooden three-section compost bin in a sunny back corner.  It was a thing of beauty.

Sometime in the early aughts, a non-profit partnered with the City to do a kitchen composting training and research project: they offered training at local libraries, supplied people with kitchen compost containers for free (with *strict* guidelines about what could and couldn't be put it the compost -- no meat or dairy products!), and in return asked us to track how many containers we put in our garden compost piles instead of the trash, for a year.  I went to the training, signed up for the program, and started to feel like I had a small clue.  Beloved Wife and I started composting our kitchen waste as well as our garden waste.

In the late aughts, we were living in a large city in the Pacific Northwest when they introduced kitchen compost waste collection.  You just put everything in the same bin as garden waste, which they already collected.  And because the City had a high-temperature cooker, you really could put *everything* in.  If your house or building's bin was big enough, my wife joked, you could put a whole side of beef in there.

It was amazing and liberating.

Now, every housewares store I go into carries kitchen compost caddies. The city where we live collects compostable waste.  Garden waste collection and kitchen waste collection are separate; you put your kitchen compost in a compostable plastic bag, and in our neighborhood, take your bag down to the bin at the end of the street.  The opening's too small to fit a whole side of beef, but still, we put pretty much everything in there.  For garden waste collection, you put your compostable waste directly into your brown bin, and it gets collected curbside.  We also have a compost bin of our own in the back garden.

We have curbside collection of metal and glass; we take paper, cardboard, many plastics, and other packaging down to the bins at the end of the street, too.  And we recently got glass bins at the corner, as well.   We can take other plastics, batteries, paint, textiles, and a whole host of other things to a City recycling centre.

At local institutions, from cafes to universities to hospitals to airports, there are separate bins in public spaces for dry recycling, compost, and landfill rubbish/trash. (But not at train stations. *sadface*)

So there I was, this afternoon, putting a tea bag into the compost bin on the kitchen counter, and suddenly thought of how that simple thing *wasn't an option* for me 30 years ago in the place where I lived.  30 years ago, it went into the trash.  I'm glad it doesn't any more.

This planet is sacred.  This planet is Goddess.  The Earth's air, fire, water, and dirt are my breath, energy, tears, bones and food and drink; they are me; they are my sustenance.  Whether it saves the planet or not, I can't bring myself to landfill that teabag...