I hope everyone had a good Winter Solstice, filled with the blessings of the Dark Time of the Year.

Last year brought a very snowy Solstice to Seattle: Winter Solstice itself was the second of three snowstorms in a week. Record snowfall brought the city to a grinding halt for days. Winter Solstice was on a Saturday last year; it started snowing again that afternoon, and finally stopped snowing that Sunday night. (When we flew out to visit relatives on Thursday, the buses still weren't running in our neighborhood, and we hiked, using backpacks for luggage, half a mile to the freeway to catch a bus downtown to transfer to the bus to the airport.)

On Winter Solstice last year, a small group of folks still made it to our apartment for a Roses, Too! potluck and a Winter Solstice Celebration based on A Winter Solstice Singing Ritual. This was the second or third time I'd done it with a small group, using the cd for the music. We had five adults -- just enough for readers and the narrator -- and a four-year-old, and had a warm, cozy time in the candlelight with the woodstove. Everyone made it home safely, eventually, though the two miles uphill to the U District was a haul for some.

It was a beautiful Solstice. 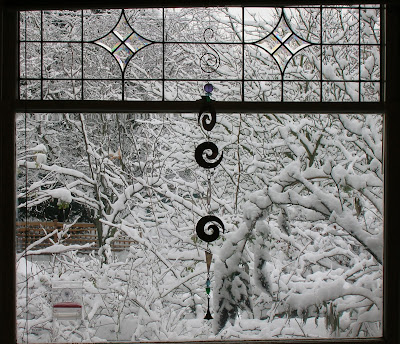 (c) 2008
So, now here we are in central NJ, and there's record snow here already now, too! (I think it's just following me around the country right now...)

Friday evening, dear F/friends who are part of the extended Roses, Too! community graciously hosted the Roses, Too! Tradition Winter Solstice/Yule potluck at their home in Philadelphia. They've hosted a number of potlucks in the past, and it was a treat, for me, for us to have a potluck there again.

We had delightful company and conversation, and we shared all sorts of yummy, festive, and comforting food and drink -- hot mulled cider, homemade fettuccine alfredo, cider donuts, chocolate (of course), apple cobbler with local Philly Vanilly ice cream, cranberry-jalapeno salsa (which I bought from a local farm store, but which is not as good as my friend Jennifer F's from CA), a cheese-pepper-onion torte with a sweet potato crust, all sorts of good things.

And then we shared a hilarious, intergenerational game of Apples to Apples. At one point, I was laughing so hard my stomach hurt and I couldn't quite catch my breath.

We knew a big winter storm was brewing, and sure enough, record snow came to much of the East Coast with a blizzard over this weekend.

Our community-wide Winter Solstice Celebration / performance of A Winter Solstice Singing Ritual (with SpiralSong, PAI/DVPN, and Pebble Hill Interfaith Church) was snowed out Saturday night, as was Sunday night's dress rehearsal for the second WSC.

Last night, however, lots of people made it to our Winter Solstice Celebration (with SpiralSong, PAI/DVPN, and the Inner Path), and it was just delightful.

I loved singing with SpiralSong again; our readers, narrator, and stage manager were wonderful; the "audience" (in quotes, because it's actually very participatory) were wonderfully present with us, and enthusiastic during the high-energy parts; our musicians were excellent (and I had lots of fun drumming with our drummer); and the management and collection of lit candles went more smoothly than I think I've ever seen it.

Our hosts, the Inner Path, are members of the Delaware County Peace Center, so our Celebration was at the Springfield Friends Meetinghouse. This is a great space for this Celebration -- conducive to the ritual, warm and intimate without feeling cramped, and quite nice acoustically (something that is definitely not true of all old East Coast Meetinghouses!).

Plus, there was this moment at the beginning, when the singers first saw the "audience" after we'd processed in, and were facing them, singing with them... I saw so many familiar faces, and so many I didn't know. Among the familiar ones were friends who were there for the first time; folks who were there for the first time in a long time; folks who have been to these Winter Solstice Celebrations every year since the first one in 1997; folks who drove long ways; women I've sung with in the past and haven't seen in too long; folks from different parts of my life who had no reason yet to know each other... It was a magical moment in the web of connection and community.

How has your Winter Solstice been? What gifts of the Spirit has it brought? 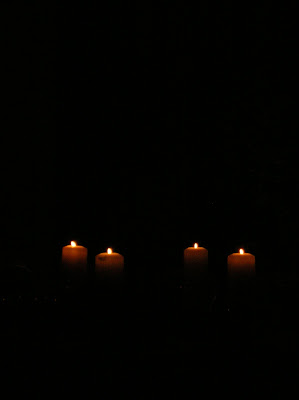 Someone posted a comment on another entry, but in response to Solstice, that they wished they lived closer for the singing. Here's part of my reply:

For Solstice, at least, you don't *have* to be near me/us... You can do A Winter Solstice Singing Ritual yourself, you know. :) You really can do it in a small group with the CD -- I've done it that way several times, now. Or you can see if a choir or chorus you know is interested in taking on the singing. Or you can get some people together who want to learn the songs, and do it either in your living room or as a performance. Don't let the fact that it's been done as a big performance limit you or your imagination: it's really pretty versatile!

I'll add now that I've done this Celebration a bunch of different ways:

- with a singing group, as a large, community-wide, Celebration;

- with ten drummers and the CD;

- with thirteen people who sight-sang in an unheated gazebo (!);

- with three other adults and a 4-year-old in my living room with the CD.

- by myself, with the CD and a pair of headphones and the book!

My solitice was a chance to reflect and think about what I need to grow and nuture in the year ahead. Someon sent me a beautiful poem - Rilke on Winter Retreat which set me thinking and reflecting (and blogging of course!)