I have been amazed, lately, by how early it gets light, and how late it stays light. If we weren't training the cats not to wake us up for food (it's working, by the way), I wouldn't need to set an alarm in the mornings. I don't feel like drawing my curtains until after 9 pm at night. Wild.

So I thought I'd look up the actual sunrise and sunset times, and see if they're really all that different from when we lived in Philadelphia, or better yet, when we lived in Michigan -- because I know they were definitely different in Michigan compared to Philadelphia. We were much further north in the time zone, and almost as far west as you could be and still be in the same time zone. I'd have to see where we are comparatively, east-to-west, in the time zone here, but I do know we're much further north than we were in Ann Arbor (47th parallel here in Seattle; 44th parallel in Ann Arbor; 40th parallel in Philadelphia). 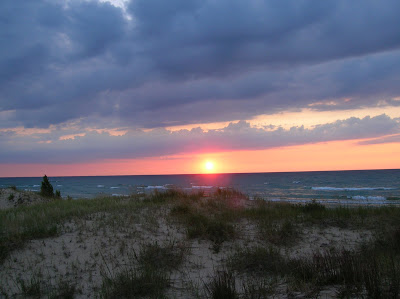 The US Naval Observatory has some very cool tools, including ones where you can get the sunrise and sunset data for a single day, or a whole year.

So on Summer Solstice, we have

Today's post is brought to you by the joys of scientific geekdom in the service of spiritual mysticism. :)

I'm quite sensitive to these latitudinal variations. Visiting Vancouver over summer solstice a couple years ago was impressive, as the long light confused my inner clock, driving me towards some nearly sleepless nights.

I can totally see that. I spent one Summer Solstice in Grayling, MI, which is a few hours north and a little west of Ann Arbor, and was amazed by the difference. I was walking around one night at 10:30, and it still wasn't completely dark. The sky was an amazing, amazing shade of deep blue...

I've been on coast to coast flights on both the winter and summer solstices where the time changes respectively made the longest night three hours longer and the shortest three hours shorter. That was downright odd.

I need to adjust my bedtime here in Philly, since the sun is definitely waking me. I don't mind getting up early if the sun is up -- but not if I haven't had enough sleep.

I did a math project in high school with the hours of daylight over the course of a year for various latitudes. It turns out when graphed, it creates a perfect sine wave. I figured out the formula to get the equation for the sine wave if only the latitude was known. I've forgotten a lot of the details in the intervening years, but it was really cool. I love math that actually has to do with real life!

One summer night I was there I was walking home from the bar at about midnight. There was still just enough light in the sky to be able to see the outline of Scotland, 13 miles across the water. Mad!

Johanna - Wow! All three of those things are very cool.

Yes, that's the kind of math that I get excited about, too.

Sue's in Scotland right now, and we were talking about how long the days are there at the moment. :)